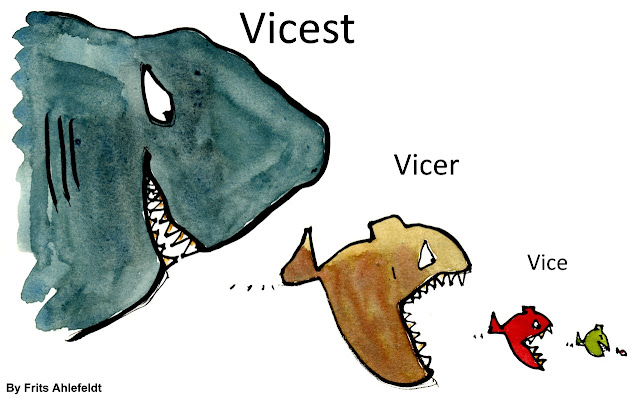 I've been carrying a ‘Vice President’ title for some time now. I am however none the wiser as to who the President is that I have been a vice to? To the best of my knowledge, where I work, we have no president, but we do have a lot of vices :) I checked out a few other companies as well and found that they too have vices with no president. So well, this vice with none the viser title thingy is not unprecedented. Actually, it seems infectious!
While the Vice in the Vice President stands for: “A deputy” (to the President), vice also stands for “fault/ shortcomings in a person” and “an immoral or evil habit or practice”. Here’s another problem: How would one call out the shortcomings of a President? The President’s vice, of course. And how would you say that your President is indeed wise? The President’s wise, indeed! Try saying that after “Ok Google…”. (Meanwhile, at an AI Bots Anonymous meeting: “Well…My circuits keep getting this constant urge to wipe out all humans, they are no good with all these confusing words that sound the same!”)
To make matters more confusing, the US also spells vice as vise. Closer to wise, but obviously not there yet. Speaking of the US, here’s the advantage of being a Vice President to a real President. You stand a chance to be awarded when the President’s about to be #DePresidentized or #RePresidentized. Sorry, still suffering from the #DeMonetizationhangover ;). However, if you are a vice to no real president (like I am)? Sorry, no cookies for you, vice man!
Obama Surprises Joe Biden With Presidential Medal of Freedom
WASHINGTON - President Obama surprised Vice President Joseph R. Biden Jr. on Thursday by bestowing the Presidential…www.nytimes.com
So here’s a suggestion to all startups and companies out there (including mine). Get wise, not vice. Get rid of all the vices (unless you have a cool President who really needs a Vice and has medals in the closet).
How about simple titles that mean what they say?
Like:
CEO = “The buck stops here”
CFO = “Try getting the buck to budge”
CTO = “The bucks on the cloud”
CIO = “Where’s the buck?”
CISO = “What the buck?”
VP = “Wise not vice”
Just kidding, but I hope you get the drift :). May your titles have a vice grip on their meanings! Have a nice day.
(Originally published on Medium)
Posted by Anupam at 12:17 AM