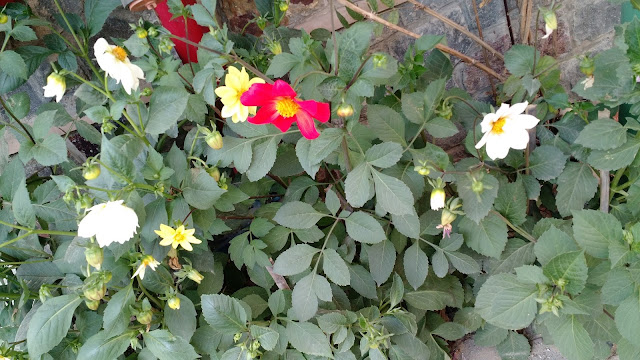 Implicit Equality is one of those concepts that get drilled into our formative minds. The world around us however, seems to teach us the exact opposite. Slowly, we conform and accept our place under the sun. Sure, there are rebels and there are those who gladly abdicate; but most people, sooner or later, simply fall in line. The line is neither straight nor fair.

Don’t get me wrong here; I do wish for a world where all are equal. I’d only like to acknowledge my realisation that the truth is far from what I’d wished it would be.
I’d also like to be aware that it (mis)leads us to think that equality implies sameness. Very often, we therefore also expect everyone else to be like us.

Should the implicit equality tenet then be questioned? Perhaps rephrased? Maybe; just to open our eyes to a world that is a riot of colors! Infinite strokes in infinite hues. Non monochrome. Perhaps we should be taught instead that the only thing that is implicit is that all are different, and rightfully so!
On the other hand, it is important to remember the context in which a statement like ‘all men are created equal’, was made (gender bias notwithstanding). It was a time when people of a certain color were subjugated and exploited (way worse than it is now). It was a powerful statement to remind people that despite the differences, all were entitled to equal opportunities, choices and dignity. Liberty! It is also a grim testament to the fact that as humans we are prone to exploit, given a chance.
Let me now focus on the second word from the title of this essay: ‘lives’. Life. In primary school, I vaguely remember being taught about living things and non-living things. Stone? Non-living. Tree? Living. Human? Definitely living. Dog? Living. Mosquito? Living, yes. Would a growing, learning, energy consuming, and reproducing humanoid robot from the future be counted as ‘living’? Not sure? But that’s extreme, you’d say.


Another example: Leaf. Is it a living thing or a non-living thing? Some say, if it is attached to a live branch, it is a living thing. When exactly does life leave a leaf? The instant it gets detached from its branch? Surely its cells continue to show signs of life for a long time after its detachment. Perhaps then, the leaf is dead but its cells are not until they get to a state where they have nothing further to do with the rest of the cells in the leaf?
Life sure is mysterious. If ‘life’ essentially is that one force that is all around us and even within us but we have no comprehension of, it is implied that it is ‘precious’. (By human definition, the rarer something is and the harder it is to be manufactured and understood, the more is its value. Therefore: precious. Diamond? Precious. Sand? Abundant. Cheap. Potable water? Precious.)
However, we humans have also developed compromise mechanisms to conveniently diminish the value of life (which is fundamentally wrong if something is an implied truth) where beneficial. Ant? Can be squished under our toes. Chicken? Can be killed for food. Dog? Whoa man, have some shame! Ok, cabbage? Sure; chop!
Here’s another example. Soldier’s code. Foe? Kill. Friend? No kill! Collateral damage? Shit happens.
Interestingly, Jainism is an ancient religion with its roots in India where its monks really go to the extreme to ensure that not even the tiniest of ‘living’ things (with jiva, soul) is harmed by them ever, not even by accident! Respect!

In following this discipline Jain monks may be observed treading and sweeping in their temples with the utmost of care so as to avoid accidentally crushing crawling insects, or wearing muslin cloths over their mouths in case they should accidentally swallow a fly.

However, for most of the rest of us who are not in that elevated plane of existence, the truth is that all living things are inter-dependent and have tofeed off other living things to survive. Now, accepting that eating plants is fine while eating chicken is not fine is acknowledging the fact that all lives are not equal. Or even that eating chicken is fine but eating X meat is not fine is again a manifestation of the fact that the notion of ‘equality’ is a non-linear and complex interpretation by a set of human brains, nothing more, nothing less.
Food aside. What about rich and poor? Are rich lives equal to poor lives? Is the value of life of the head of the largest conglomerate equal to the life of the poorest beggar on the street? Is the value of life of a head of the nation equal to the life of a soldier who stands in the battlefield? If they are equal, they must be treated equal no? If not, we must acknowledge that their lives are not equal.

Life is beautiful. Lets celebrate its differences. The line between use and exploit is thin and we tend towards the latter. Let’s be conscious of this as well.

What in your opinion then should the principle be? What flaws exist in my reasoning? What should we teach our children such that we don’t sound like hypocrites? Do think and share your thoughts.
Posted by Anupam at 8:46 PM No comments: