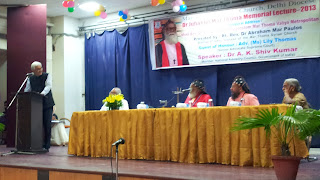 Last Sunday, I had the opportunity of attending a lecture delivered by Dr. A. K. Shiva Kumar, member of the National Advisory Council (NAC), a development economist,  a teacher at Harvard and whose PhD supervisor at Harvard was Dr. Amartya Sen. The lecture was this year's presentation at the Dr. Yuhanon Marthoma memorial lecture held annually by our church in Delhi.

The inaugural address was made by The Most Rev. Dr. Philipose Mar Chrysostom Mar Thoma Valiya Metropolitan (also known as the man with the golden tongue ;))  and presided by Rt. Rev. Dr. Abraham Mar Paulos, our bishop for Delhi. It was also the occasion where Advocate Lilly Thomas (who is unbelievably down to earth :)) was honored for her bold stance against tainted legislators which resulted in a landmark judgement by the honorable Supreme Court of India.

I will intersperse my notes of the main lecture by Dr. Shiva Kumar (may not be verbatim) with some interesting references from the web and some of my inferences.


Going beyond GDP as an indicator of human progress.

GDP is today the de-facto performance indicator that is used to benchmark national progress. The wikipedia link and countless economics textbooks provide quite a few explanations on how exactly this number gets determined. However, the point being made is that the GDP perhaps misses out a lot more than it is believed and perceived to cover. It apparently measures "all except what is really worthwhile".


For example, capital cities usually have the maximum in terms of these economic indicators but fare the worst in some of the human indicators indicators. Beyond wealth, is the value of wealth. For example, access to education, freedom and other such indicators may be a better measure. This is what the governments must have provided to its citizens. GDP does tell something; for example, it took 40 years to double India's GDP but the next doubling happened in the last 10 years!

This is where I read about a very interesting alternate indicator. GNH or Gross National Happiness. GNH is apparently a very serious and a central indicator for our tiny neighbor Bhutan.

Do read this article titled: Is Gross National Happiness more important than the GDP? by Josh Clark. It has many interesting links and insights into how GNH works. Here is an excerpt:

"...Rather than submit to the conspicuous consumption that characterizes much of the developed world, Bhutanese leaders chose to join the global economy on their own terms by measuring how the facets of its economy affect the positive outlook of its residents. Beginning in November 2008, all the economic factors used to measure gross domestic product are analyzed for their impact on Bhutan's residents' happiness. The factors of production are still there -- unemployment, agriculture, retail sales -- but GNH represents a paradigm shift in what's most valued by Bhutanese society compared to the rest of the world. In short, happiness matters, not money. The ultimate goal is economic support for the four pillars of Bhutanese society: economic self-reliance, preservation and promotion of Bhutanese culture, good governance and a pristine environment. [source: Mustafa]..."

Popular wisdom teaches us to measure happiness in monetary terms. While it is indeed true that the lack of access to money does restrict many and may force hardships on them, confusion arises when money becomes the sole object of pursuit and happiness takes a back-seat. Poverty is undoubtedly capable of becoming a viciously crippling cycle and that I believe is not being debated.

There are five types of growth failures. [I guess there was some reference to Human Development Reports here to which Dr. Shiva Kumar has been a contributor].

1. Jobless growth
92 million employment generated in the first 40 years. From 2005 to 2010, only 2 million net jobs added, despite the relatively high GDP growth exhibited in this interim.

2. Ruthless growth
Gaps between bottom quintile and top increasing. Growing inequality. Apart from the obvious issues with this disparity, fundamentally, aggregate demand in the economy decreases. For example, consider the top 10 millionaires deciding to increase their consumption by 1% viz providing 10 million people with even a few thousand rupees of additional income. The scale and distribution of creation of economic opportunities is manifold in the second instance. Therefore, proper growth should result in proper distribution of wealth.

3. Voiceless growth
When majority have little say in their own affairs. Prevention perhaps involves decentralized and distributed allocation and governance of public resources. Central schemes may miss out local needs and nuances. Also the pyramid will always be skewedly massive as it reaches the bottom rendering the top as perhaps ineffective 'representatives' of the collective.

4. Rootless growth
Honesty, integrity trustworthiness- when the intrinsic value of these words decreases, it results in rootless growth. Where people do not, from the inner-self, realize what is 'wrong' with corrupt or illegal or immoral practices. There is a limit to policing and enforcement. There needs to be a stress on the importance of an ingrained sense of fairness and justice.

5. Future-less growth
The present generation using up resources as if there is no tomorrow. The way some of the mining deals have played out have been short-sighted to put it slightly. Results in squandering away the wealth of the nation.

In short, growth as we know it is necessary but not sufficient. Quality is growth is what completes the growth story. Need to recognize that income is only a means, and has no intrinsic value.

After setting the foundation for an inclusive and true reflection of progress, the talk moved towards the other two key-words: Justice and Peace.


Views influenced by Amartya Sen who says that Justice must be seen as an 'enhancement of capabilities'. Progress is achieved when all the citizens have been enabled to appear in public without shame or fear. It is the 'widening of choices and the ability to enjoy them'. 'Dominating chance and circumstances'. Expansion of freedom to do what you want to do and be what you want to be. 'Assurance of human rights'. 'Removal of unfreedom'.

The focus of Justice must be removal of perceptible injustices rather than trying to attain and define the Utopian just society.

Do rights have meaning if they cannot be legally enforced? Human right surpasses legal rights, irrespective of laws. Its true that legal rights provide a better framework. Formally recognizing these rights builds up a social contract to enforce it. Absence of it removes a collective social conscience towards guaranteeing it. While arguing against some of the recent Right to education and Right to food bills, a common retort has been 'Where is the money?' The answer is that these "Just had to be done. Made into a political and social priority[-Sonia Gandhi?]". Also, "If you think education is expensive, try ignorance [Derek Bok]. There is a price [which may not always be apparent] of not putting some of these social contracts in place. The cost of inaction far outweighs the cost of implementing these.

A sense equity and fairness are central to the idea of justice. There are a lot of invisible inequities. Eg: Sex, Caste, Age, Religion based, Location of birth. Also, there are conscious choices and unfair choices. These disadvantages should be focused on to remove injustice.

On peace. Is there a linkage between poverty and violence? It is known that peace can co exist with poverty. So poverty alone does not explain violence. Lack of access to resources [poverty] however, has been one of the key reasons in uprisings and conflicts.

In the final part of the lecture, he briefly provided some thoughts on what the way ahead should be, to lead us towards a more inclusive, progressive and a just society:


1. Get much more agitated by injustice.
2. Be deliberately inclusive. When street vending bill was discussed, fees to be charged to then for use of public land was discussed. However, [strangely], no one talks about charging the more affluent for parking on public roads in some of the posh colonies in Delhi with the same conviction!
3. Have a greater accountability in public life.
4. Convert public grumbling into concerted public action.
5. Rethink how as a society we need to look at progress indicators. Ensure that we include things that really matter. Like happiness :)

Quite a lot of things to ponder upon as we get back to our rat-races blissfully blind to the slowly crumbling society around us. It would be great if at least some of us can think and contribute towards a more inclusive, just, peaceful and a happy world!
Posted by Anupam at 3:48 AM No comments: