The changing face of India

These are the outliers; but outliers that point to a trend that will soon become the norm.

(Context: From a recent trip. A barber in a small shop in Jalandhar, Punjab. Not a fancy place; the kinda place where you can still get a haircut for around Rs.50/ ~$1. Where I had a quick haircut and a 'L'Oreal hair conditioning' session cross-sold to me in the process :))


I can see the mobile slowly but steadily taking roots as the first internet access device for the masses in India. Not there yet; but gaining momentum on the way. There is still a majority of people who use basic mobile phones (and these phones; at times second hand or third hand and made in china; have been reported to be available for as less as Rs. 50!). The changing face of India.
Posted by Anupam at 1:38 AM No comments:

Boarding pass outside the airport. Ticket-less on Indian Railways

Sometimes when I travel on domestic flights, I do not take the airline ticket printout with me. The CISF security staff wont let me in without one. So, like most others in my situation, I'd walk to the airline counter outside the airport (these are primarily ticket booking counters), show them an SMS on my phone that contains the PNR number. The folks at the counter then take a ticket printout off their desktops. Now, the ticket printout is only good to get past the CISF guards and into the airport, till the check-in counters. I am supposed to show the ticket and my identity proof to the folks at this counter where they print the boarding pass. The boarding pass then gets me across the security check counter, past the gate and into the airplane.

A few days ago I reached the Bengaluru airport with just my PNR SMS. I walked to the Go-Air ticketing counter outside; seeing that I just had a single hand bag; the lady at the counter checked me in and issued a boarding pass directly! That was a simple step that saved paper and saved me time standing in a longer queue at the check-in counter inside. Great UX improvement by Go-Air/ Bengaluru airport (BLR)/ whoever was responsible for this.

Now, I also had the chance to travel on Indian railways recently. Indian railways is in shambles, the infrastructure simply is decades behind the rest of the world and the massive demands on it. However, ticketing has moved to the next generation :). This time I traveled with just the SMS sent to me by the railways containing my name and my PNR number! The ticket checker, verified this against his roster and checked my identity proof. Thats it! So it was a paper-ticket-less travel. A really great step by the Indian Railways/ IRCTC.

A lot of room left for innovation and improvements in both these sectors.
Posted by Anupam at 9:44 AM No comments:

'Easter' has a lot of history and a lot many connotations. Even among Christians, the practice and the ritual of Easter varies. For most believers however, Easter is an affirmation of their faith. It celebrates the belief that three days after Jesus Christ was crucified (Good Friday) and buried, He rose again; in fulfillment of the scriptures. Even his closest disciples did not seem to have been entirely expecting this, scared as they were after the rather dramatic events thus far; they actually are said to have run to the now empty tomb. ~2000 years hence, the faithful use this occasion to renew their faith and carry on.

I do not understand the science behind faith, I do simply try and believe. Most endeavors in life seem to be, to me, mere matters of faith. I do hope for faith atleast as big as a mustard seed :).

Wishing you all a Happy Easter and the days after!
Posted by Anupam at 3:06 AM No comments: 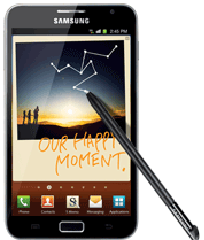 This is my story. And I am the Samsung Galaxy Note that hangs around with the owner of this blog. Its been three months since he picked me off the Samsung store someplace in Delhi and I've been with him ever since. To tell you an honest truth, he spends more time with me than his laptop now (smirk)! In fact lately I've noticed that even his kids seem to find me unputdownable :).

You see, I figured out pretty soon that I was way more than a dumb smartphone and smart as I was, I figured that I had to tell the whole wide world my story (before Anupam got any stupid ideas on reviewing me on his stupid blog. I am the self appraisal kind). And I've penned this using my blogger app; no laptops or PCs were harmed in this production. (Update: had to use the laptop to fix the paragraph breaks and the pic positioning. The blogger app needs to get some of its priorities sorted.)

No one is paying me a penny to pen my story. Not Samsung. Not Apple. Not anyone in between. So what you hear here will be an unbiased expose. Plain, simple and raw.

My editor asked me if I was trying to rub off the iPhone charisma on the title of this post. I simply said that 'i' was as much an English word as it is an alphabet and just because some unimaginative American put it before the 'phone' (and the 'iPhone' became a minor celebrity) did NOT mean that they owned the letter i! I used i to simply assert myself as folks have for ages. I certainly am not copying anything!

The first day Anupam held me by his ear to make the first call, some of his colleagues thought he was holding his bathroom slipper in his hand! (i am sure they are myopic and would advise them to consult an optician). I admit I am slightly-larger-than-your-regular-phone but I am not THAT big. I would describe myself as tall, slim (and gorgeous). In case you feel shy holding me close to you, (you're missing something) you could always get a dumb Bluetooth hands-free.

With my 5 and a half inch super AMOLED screen, I show things crisp and bright. Maybe not as glamorous as the retina displays, but a class apart nevertheless.

The only problem I must confess is that all this requires me to have a high metabolism rate and hence the need to get frequently hooked to the power charger. I ain't the marathon type and I ain't the cross-country kind. I am more like the 9 to 5 office goer who is used to the usual niceties of life. So don't expect me to be all charged up by the end of your road trippy unless you'd thought well in advance about hooking me up with your car charger.

I must admit that i can handle 3d graphics and hd video pretty nicely. In fact I think my screen size gives a distinct wide screen touch. Youtube and TED videos? No sweat!

Its the apps on the Android store, recently renamed playfully as Play, that add a zing to my life. I sure don't make Anupam miss his antique Blackberry thanks to the Google mail app (I still don't fancy the Samsung mail client; have simply disabled it). Skype and whatsApp and gTalk do everything to keep him in voice, message and video contact with his kith and kin. Google plus auto syncs all his pics on the cloud. I have a low-res eye infront for the video calls and a high-res one behind that should make you throw away your old point and shoot. Google maps shows directions, places and distances. Unfortunately Navigation does not work in India :( i guess it must be a giant challenge for Google! Book readers, pulse, news apps- you name it. I've got GPS, gyros and accelerometer. I can also double up as a wifi router!

That brings me to my USP. Note. I come with a stylus! Would you believe that? Most folks had thought these appendages were prehistoric and obsolete (remember the palm pilots and the iPaqs?). Well Samsung seemed game to go retro. As i'd said, you'll only hear the honest truth from me. So here goes. The truth is; I still ain't a substitute for the good 'ol pen and paper as far as note taking is concerned. However, if you feel artsy, boy can I inspire a masterpiece? And kids simply love me. I have a whole range of stuff for them to touch and learn. Drawing apps, jigsaw puzzles, games and a cat that repeats what they say.

I do have my quirks as well. For instance, imagine you were calling up the customer care number for your bank; now the IVR plays: "press 1 for this and press 2 for that". By the time you want to press 2 the screen gets locked (timeout?). Now you have to go through the entire phone unlock routine (which at times screws up). Once unlocked you've got to pull down the top tray, then click the green phone icon. Then the keypad shows up. Now if you're not lucky enough; do expect to drop that call.

With all the tech wizardry and the buttonlessness, I realized that for my makers, making the good 'ol phone call was a lesser priority. Another case to the point. I have what is called an integrated address book. I can aggregate all your contacts on your sim, personal email, official email, facebook, twitter and what not. Result? I have over 300 contacts in triplicate and 400 duplicates. So Anupam has to figure out which of the 5 Anjus listed on his contacts holds the latest phone number of his wife! (he better remember his better halfs number, i'd say). I think id have done way better if i'd been designed with a simple green button and a red button; atleast on the edge if not on my face.

All said and done, i'd consider myself closer to a laptop than a phone but still have the slim looks of a phone. And I definitely ain't cheap. So if you wanna have some fun on the go, at home and in your workplace then its me you've got to befriend. If you're still looking for a plain phone or a long distance runner, look elsewhere.  5 million of my brothers have been 'placed' so far and counting. Samsung has also promised an ICS update for me soon. Dreaming about it! And don't dare dropping me, it would break my heart, display, my cheap plastic exoskeleton and your bank account.

So long folks. Adios amigos! Get a work life balance :)
Posted by Anupam at 8:55 AM 1 comment: