On a cold December morning, I received an email from one of the organizers of Techniti 2012 which contained an invitation to deliver a guest lecture at the event in the same engineering college that I am an alumnus of. Eko also sponsored the B-Plan competition at the event.

It had been 11 years since I had last walked out of the campus for good, so I thought it was a great opportunity to get back and check how it had fared after my departure ;-). Work had also been pretty hectic the past few weeks and thought this could be a good opportunity to take a break.

So, I confirmed my participation and told my folks that we would be going on a road-trip to sadda Punjab, sadda college. My folks did try to dissuade me from driving, but I persisted. Google maps told me that it was just around 400 Km from Delhi to Jalandhar- how bad could it be?

Also, I remember when we were in the final semester; my good friend Rony and I had almost packed for a bike-trip (He had a Yamaha RX135? which all of us used to 'borrow' on campus) on this same route. We had helmets acquired and bags packed when at the last minute, his mom had managed to put in enough fear+tear pressure to scuttle our little adventure :(. 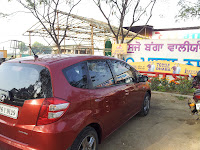 Trivia: The route we chose has a LOT of history riding on it. It is a segment of the Grand Trunk road that once stretched from Kabul to Calcutta and beyond. This was the road route which literally connected India to its history. 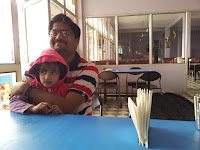 So, we started our journey on the 3rd March, exactly a week ago. It was a leisurely drive. Most of the road had been 4-laned, but there were patches where the work was still in progress. We stopped at a not-so-authentic '70 mile dhaba' and had aloo da paranthas with makkhan (chunk of butter) and daal makhani. Ah! For some strange reason it always taste better in a road-side dhaaba (road-side eatery for truckers and travelers). 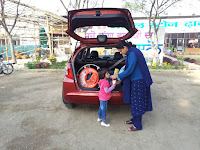 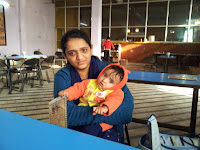 It took us around 5 hours including a breakfast break to reach near Ludhiana. The road got more and more chaotic as we neared the center.

Trivia: Back in our college days, we knew Ludhiana as a place where a thousand little workshops ran a thousand lathes, where you could park a BMW and ask the legendary sardarji there to clone it and he could machine out one in a couple of days right from his lathe :-)!

The stretch from Ludhiana to Jalandhar was around 70 Km but took almost 2 hours!! Large stretches of the road were diverted due to the 4 lane construction activity. We reached Jalandhar sometime after 4 PM and debated whether we could go to Amritsar and Wagah border right away but decided to take rest instead. So we checked in at hotel Shekhon Grand (its a just-ok-for-rest kinda place) which had been booked by the organizers. 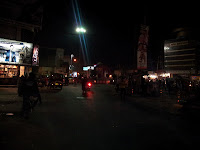 After we got fresh we went around for a drive through the city (town would be more appropriate). Visited Jyoti-chowk which was just about the only place which we used to visit from our college. Then I just drove for the heck of it, trying to see if I still remembered the route. Drove past the stadium, DAV college, Maqsuddan chowk, Suranussi and reached Bidhipur railway phaatak! (Encountered a flyover enroute and lots of working traffic lights- I am not very sure but I believe these things didn't exist back in our times)

Trivia: The new 4 lane thingy pulled a trick on me. I turned right into the main-road, expecting to pass by the college main gate where I could simply turn left and turn in. Would you believe that there is NO way you can turn into the campus from the main-road now except for taking a service lane right at Bidhipur junction OR go almost ALL the way down atleast 10 KM where this road begins!!! So if you ever decide to visit the college REMEMBER to take the service lane on the left; right at Bidhipur.

End result day 1: we went all the way to sadda college but ended up right where we had started back in sadda hotel room. Rest. Peace. End.

Day 2. Rise and shine. We started again at around 9. This time we clicked a few pics along the same route we had taken earlier.

Unfortunately, most of the dhaabas seem to have disappeared (or was I remembering it all wrong)! And I did NOT see any college kids loitering around here (kya zamaana aa gaya hai! -maybe its because it wasn't a normal working day).

Leaving Bidhipur behind, we entered the service lane. Found that the little gate at the corner of the campus boundary wall is no longer there :(. The whole campus is now gated and barbed-wired I guess. So I arrive at the main gate and am greeted by security folks who jot down my name etc... lots of security folks all around. Thats a change. 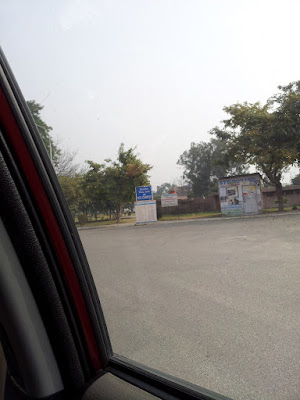 Now let me take you on a drive inside the campus. Much has changed. New buildings. 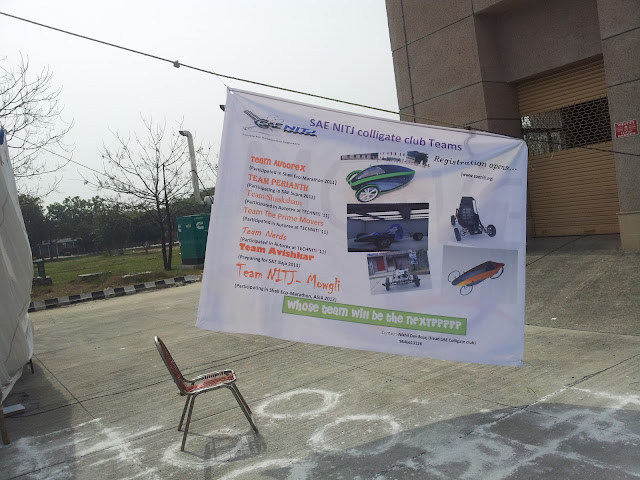 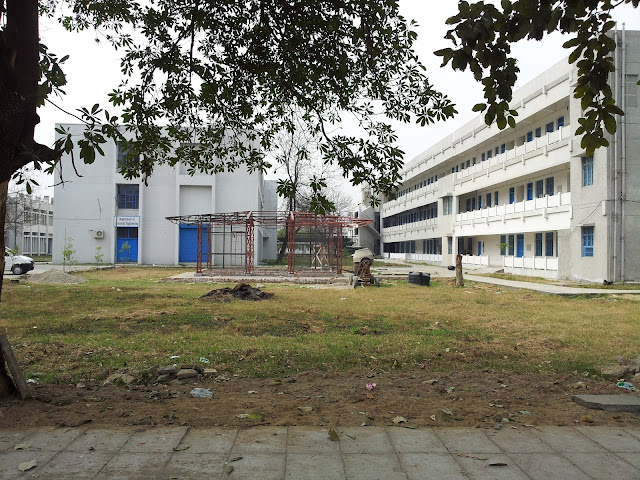 Then, I was taken in to the auditorium where the short-movies competition was on. It was wonderful to watch the creativity of the people who were putting together really good short stories. I got to watch two of them and was invited to give away the prize to the winning team which made a comical movie called 'har friend zaroori hota hai' which was on how some friends pranks played on the other (and their girlfriends) come back to bite them in the end :) Fun.

Then came my talks where the audi was pretty empty (compared to the movie screening). Obviously :). Anyways, I spoke about trying to exhort them find what they really loved to do and to pursue that with passion. Seemed to have gone well.

Then spent some time with Arun Khosla sir (who is now the ECE HOD!) who showed around the new building being constructed for ECE department.


We also spoke about the need to set up an incubation center and supporting innovative projects (will write more on that on a separate thread later). Had a quick lunch at sir's house. Met Mamta Khosla mam and their two kids. Had a good time and then started on the trip to Amristar and Wagah border.

The road from Jalandhar to Amritsar was makhaan. Smooth. Covered the 90 Km in less than an hour. Then at the junction took the road that turns right towards Atari and the Indo-Pak border. The closing the gates ceremony starts at 5 but we could reach only by around 5: 15.

Enroute we saw something that the region is famous for: Kite flying. Some pics: 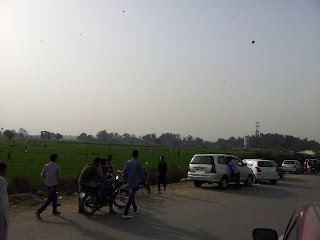 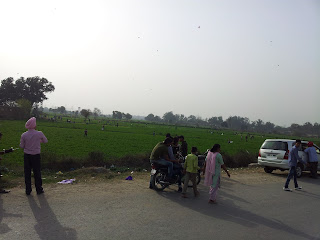 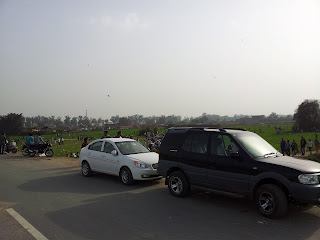 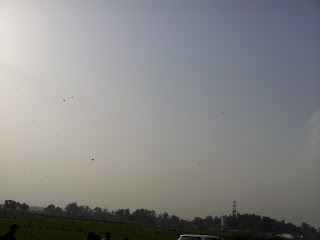 The ceremony at the Wagah border is theatrical to say the least. Some things have changed since I'd been here last. For example, I don't recall the stadium like grand-stands on both the sides where people actually crowd in everyday to watch the spectacle. Parking has become good business with a few fields converted into dusty parking lots and rickshaw walaahs flying you to the venue.

The atmosphere is super-charged, loud and electric. Beyond the gate lies Pakistan. In-between lies no-man's land. On either side they cheer the performance of their soldiers. 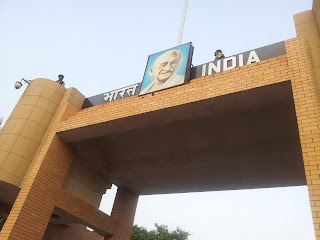 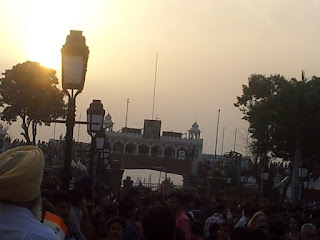 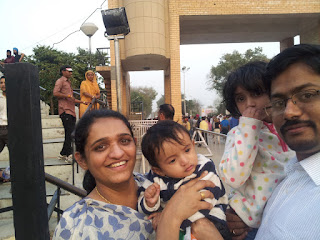 We then reached The Golden Temple at night. The services being rendered by the faithful, the utter devotion and dedication and the simple beauty of the temple at night was mesmerizing. I need to do some more history reading to really know more of its history. Thats on my to-do list now. 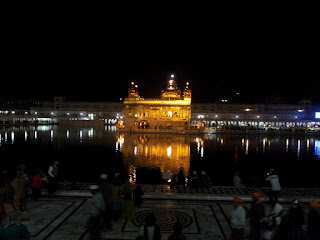 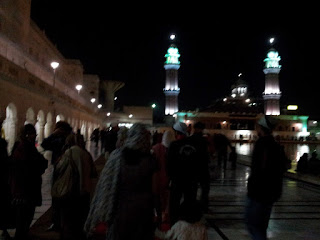 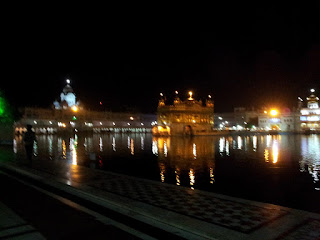 Trivia: Almost after Sonipat there was a grand Pind Balluchi restaurant on the left. We thought we could dig in to some Tandoori chicken. Unfortunately this place was all VEGETARIAN! Grand, but vegetarian. So be warned :). 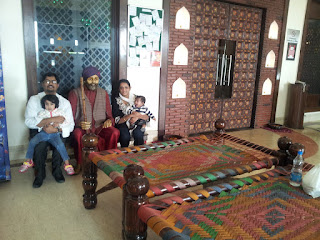 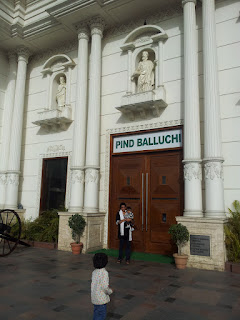 A trip down the memory lane. Back to sadda Delhi from sadda punjab, sadda Jalandhar and sadda college. If any of you had any common threads with the places I visited, hope this has brought some fond memories.

Here's to hoping and wishing that this institution (NIT Jalandhar) rises above the ordinary; as a place where real innovation, research and leaders are made!