The developing world, as the term seems to suggest; is at a stage that the developed world had crossed (or in some cases, even entirely skipped) being in at some point in time. I believe, mediated usage is a stage that most human interactions pass through initially.

Lets start from a simple but overkill-ish example. Ever heard of Bill Gates? The influential figure whose contributions range from the technology world to global policy world. Once upon a time, even he was a little baby in a diaper who could barely say 'ga-ga' and had to be fed, cleaned, clothed and taught by someone. The point I am trying to make is that doing things on our own, is not as natural or as normal as it seems. Self-transaction (of any kind) is a stage of evolution that is built upon multiple previous and related instances of mediated transactions. While mediated usage is like experiencing things using basic arithmetic, self-usage is more like calculus. In ones arrogance of context and experience, solving a differential equation might seem 'obvious' and 'simple'; try imagining what you'd have made of it as a fourth grader (if you were a calculus prodigy, sorry, this example does not apply to you). There is a certain threshold that one needs to cross before being able to be autonomous.

Let me now move to another example. Vending machines. Modern vending machines have apparently been around since the 1880s in the west! The first time I saw a vending machine was a Chocolate/ Magazines (Cadbury's?/ Malayala Manorama - don't remember which one) vending machine at an Indian railway station in the 1990s. Interestingly, there was a chair (with a person sitting) right next to it! To get a Dairy Milk bar, one had to give this person the money, he'd hand back the change from his cash-till and he would put in some kind of a special token into the machine, punch some buttons and hand over the goods that the machine spit. More often than not, he had to put in his key, open the beast up and manually retrieve what he had to from its innards. Something drove the company to invest in a layer of mediation while transplanting something that seemed to simply work by itself in the west. You'd note that the vending machine was actually made redundant by this layer of mediation. The company might as well have put a dumb shopping-shelf instead! Well, I think there is a reason to it- a longer term purpose- we'll come to that. 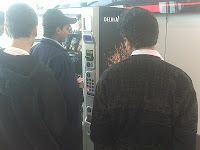 My most recent sighting of vending machines in India was in the new International Terminal of the New Delhi Airport. I guess these were from Pepsi co. Just for the heck of it, I tried following the instructions for a fruit-drink pack. Try as I might, the thing wouldn't take my ten rupee note! Finally, a guy came around with a bunch of keys, opened the machine up and gave me what I wanted :). Note the guy wearing a cap with a bunch of notes? He's the 'vending machine mediator'.


ATMs in India are a great example of how mediated usage has over time, evolved into self-transactions. Quite a few ATMs in India had and continue to have security guards posted outside them. Many a times, when first time users get stuck, they actively seek the help of these guards. It is interesting to note how an immediate need (for cash) or the aspirational need for becoming an ATM user drives people to trust near-strangers. We human beings are inherently 'social' and at times take decisions based on emotional reasons and relative perceptions of risk vs. reward rather than rational algorithmic ones.
(Dude: "Siri- should I ask the security dude outside this ATM to help me with my withdrawal?"
Siri: "Of course not! Your mom says, don't talk to strangers!")

PCO or the Public Call Office phenomenon is another uniquely Indian one. Long before mobile phones got in vogue and when there used to be year-long waiting lists for getting dumb rotary dial land-line phones, the then visionaries had a brainwave: That of entrusting atleast one phone line in every village with a local entrepreneur and enabling him to meter and charge for the call. Not very long ago (when mobile phones were a super luxury), when I was an engineering student at NIT J, we used to go to the village right next to our college ('Bidipur') and queue up outside the STD PCO booth there once every week (late night- they had discounted tariffs then ;))  to make a long distance phone call to our parents. Thankfully, we are in a different era/ planet now! PCOs still exist and still continue to be relevant in some parts of the country. What was interesting about the PCO was the way many of the villagers used it. They carried a paper chit with the destination number scribbled on it. They would dutifully hand it over to the booth operator who would dial the number on their behalf and once the call was connected; make an introductory announcement and hand over the mouthpiece to the caller to proceed with whatever publicly private conversation he/ she had to make.

The point is; that the option of having that mediated transaction enabled the poor villager to access a service he/ she needed which the person otherwise would not have. Over a period of time, (as is evident with the mobile telephony boom we are witnessing now), people do get over their barriers and learn whatever minimum viable product/ service that they need to use. But having an external spark, sure helps start the fire.

The last example I'd like to give shows cultural inclinations for mediated usage. India has millions of small mom-n-pop shops (grocers, chemists, textile vendors, 'paan' shops et al). Unlike the west, where people drive down to the closest mall once a month and stuff their cars with all the super-sized things they think they might need; in India, a mother would send her son/ daughter with a small list and the list could be as small as a single item ("Son, please go and get 200g sugar- hurry, I have already put the porridge on the pan!") The son would then run (or cycle) to the friendly next-door grocer (usually, no fake smiles or smile-badges here, strictly and simply business-friendly), buy the stuff wrapped in an old newspaper (+ two candies bought slyly with the spare change) and run back home- just in time for the mother to add it to the heating brew.

Self-service larger format stores are a very recent addition to the Indian retail landscape. But despite their discount offers and the promise of getting everything under a single roof, its been difficult for them to threaten the well-entrenched next-door shop's mediated shopping model. This is because culturally, we have been used to this kind of shopping (with the bargaining sessions, touch and feel instances, recite-the-shopping-list and someone hands you the goods in a jiffy shopping, mental arithmetic/ scribbled bills, moles and warts and everything that comes with it). Simply because it seems more human to us. Perhaps the next generation in the urban context may not share this perception.

Eko also leverages mediated usage to the hilt. Its promise of simplified banking and financial transactions presents a HUGE trust barrier that potential customers need to cross. While we believe that self-transactions are but a natural extension to enabling such an access, mediation of transactions through these trusted shops (where people have been buying their groceries/ medicines for years) is a great base to build on.

An important principle we've always believed in is that customers are not stupid. While this might sound like a strong statement to make, it is relevant in the context that many people still design services and solutions for the less-privileged as if they were lesser people! They might not be very educated and may not tote an iPhone but they are smart and nothing implies that they are stupid. The fact that they use mediation is not a measure of the weakness of the customer, but rather a measure of the strength of the mediator. The act of mediation represents a basic human-bond of symbiotic needs; customers' trust in the shopkeeper and the shopkeeper's need to have customers. There would of course be bad apples, people who could misuse their position of trust. The antidote is in having efficient selection and monitoring systems to weed them out.