Every honcho worth his salt, dealing with rural retail in India, swears by the sachet story and ensures that atleast a slide in the corporate presentation is dedicated to it.

For my lack of better imagination; imagine if every book on a say, 'Engineering Mathematics' started with the same dedication page

This book is dedicated

- such is the magnitude of influence of this one word on the way folks (us at Eko included) try to position a product for the not-urban India. The Sachet Story in short, is nothing short of a hyper-polygonal love story (some of our Bollywood movies are still stuck with the triangular variety!), with a whole army of heroes trying to woo 'ol Miss Sachet with whatever they could fling at her.

To the uninitiated, this is how, they say, it all began (courtesy, a slide shared by Dr. Amit Rangnekar):
Case: Chic Shampoo- Rural Revolution

This essentially says that sometime in the '80 or the '90s  a relatively unknown player called CavinKare, literally pulled the carpet under the entire group of global giants trying to sell their shampoos in India by understanding the simple fact that theres only as much as a customer could ever pay. If one could sell something at that price then it required nothing more than a nudge or a light tickle to persuade them to buy that something. So, they sold shampoo in tea-bag sized packets at 90p and then at 50p and viola- Sachet was born!

Cut! Flashback two decades. Thats me, sweating under a groaning fan, frantically trying to coax the very last hint of black ink out of my fountain pen while the school bell rings and the teacher non-nonchalantly snatches the answer sheets, right underneath my pen's nib, before it could stutter its last dying words. No amount of cursing or praying would make any difference now. Except, maybe it did make a difference :). Well... then came a pen we simply knew as 'Reynolds'. Out went the nib and the ink-pen and the ink well; the 'pencil box' had new international tenants. I could buy a few Reynolds for the price of one ink-pen and the best part was that it democratized and simplified the process of writing. That Reynolds was the first 'sachetization' to have hit most of 'us'. While true connoisseurs did cry foul for reducing the sublime art of writing to its basal nothings; the venerable ink pen was extinct. I must admit though... its been years since I have written more than two straight sentences with any pen; who 'writes' these days anyways!?

If there is anything that has contributed to the growth of the sachet industry, its the advent of plastics. Till the cheap plastics came about, it was neither economical, nor practical to pack gooey dollops of liquids, gels and what nots into gulp sized units and print glossy true-color portraits of dames showing off their photo-shopped long hair. And plastic remains its bane, especially in most emerging countries. While these engines of mass consumption went on an overdrive, generating all forms of consumables in plastic avatars, they stuck a moniker - 'disposable' on them, without having the faintest clue on how to manage their disposal.

Oh, and add to this the fact that somewhere along the path of evolution, after the elaborate drainage systems of Mohejo-daro and Harappa that made it stand out as civilizations, most of us Indians have lost the gene that should have kicked in when throwing trash in public places- its so easy to blame the genes and get away with it ;). 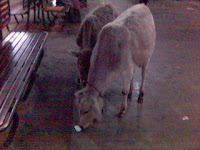 And, TaDa! even our animals seem to have taken to plastics- just that their intestines don't take as kindly to it and they end up dying a slow death.

If only plastic packaging were portrayed as not disposable by default, but as a re-usable novelty! True, this has something to do with the packaging industry on the whole, the sachet industry should not be the prime culprit - but definitely an accomplice.

What if all plastic using companies had to ensure by law, that they also had to buy used plastics back from the customers through the same channel that they sold their goods! ...Nothing more than wishful thinking. Sure, some companies are making token efforts as a part of their CSR programs- but we know that something like this will succeed only if it is a commercial program- an integral part of the product life-cycle. 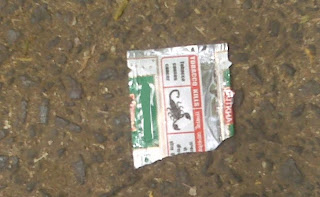 Well, if that was the bad, now comes the ugly. Trust me, this one IS ugly. Try this. Walk ten paces in any direction on any road in Delhi (or any place in North India), look down. I can bet you will find at-least one every odd yard. This innocuous package is called 'Pan Masala'. (The scorpion in the pic is not a part of some fancy kickass branding- thats the mandatory warning sign these have to carry)

Paan, I read has been around since ages. It is a betel-leaf wrap with areca-nut, lime and motley spices inside 'em- supposed to be chewed as mouth fresheners post meals. Somewhere down our colonial past, tobacco was added to the list of ingredients.

Commercial Paan Masala was a recent development, where a Rs.5000 crore+ industry has sprung up with various combinations of pan ingredients. The sachetization wave was readily adopted by these manufacturers and it has resulted in their sales shooting straight up. One variety of pan masala was particularly potent- the one with tobacco as an ingredient. It has now been established that pan masala is as addictive as cocaine. In its sachet form, this ended up as the only cheap thrill- that the entire bottom of the pyramid here had access to. This sachet is more ubiquitous than any other, especially in North India. From kids begging on the streets to migrant drivers ferrying their bosses in their posh cars on the streets of Delhi - ALL have a few sachets stashed in their pockets. It either helps them forget their hunger and pain or has become a plain addictive habit that they just cant kick.

Used packets are simply discarded everywhere- literally everywhere. Another unsightly addition to the plastic mess we've landed ourselves in.

The web is strewn with stats, figures and facts on this topic. Do read this one when you get time:
Chewing Pan Masala and/or Betel Quid–Fashionable Attributes and/or Cancer Menaces? G. Gandhi, R. Kaur and S. Sharma

The sachet story is a pretty dramatic one. A simple bi-syllabic word that has touched a few billion lives in a few good ways and a few bad ones. One conclusion is unambiguous- Sachet has redefined the word consumption- forever.
Posted by Anupam at 12:07 AM