Most of us would have heard of the term microfinance (oft misused for micro-credit). Here is an interesting company called VNL (Vihaan Networks Limited. 'Vihaan' apparently means new dawn) which promotes the concept of 'microtelecom' through its innovative, open-source, low-power, low-overhead, easily-installable, non-airconditioned, (even solar powered!) rural telecom infrastructure system called WorldGSM 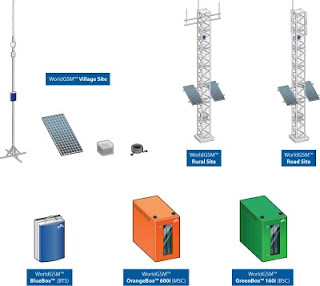 I believe, along with its other counter-part - solar/ low-powered mobile handsets (powering the next billion cell-phones), this forms a really viable ecosystem.

The future of micro-finance itself depends on the way in which mobile telephony is (and will continue to be) able to permeate to everyone in the pyramid. We already know that the catchphrase 'roti, kapda aur makaan' ('food, clothing and shelter') has already been hacked in India as 'roti, kapda and mobile' ;). Already, call rates in India are the lowest in the world (1/2 paise, per second is the latest mobile ad-lingo). Such low-cost access to communication requires a new outlook and thus the jargon 'microtelecom' fits right in. Once microtelecom is in, can microfinance be far behind (Its actually doing pretty fine with even plain-old telephony :))?

There is this thing about 'smart dust', though only a concept as of now (some prof from MIT suggested this for the first time and it has been used by many after that). Also we still need communication engineers to do a lot before this becomes a reality, however, these guys should definitely be on a lookout for that technology....

also I really need to talk to you soon so plz take out some time for a short discussion with me, will call you accordingly....am in TVM as of now for a month or so hence if you are planning to come down anytime soon it will be great to catch u in person

Smart Dust sounds really interesting. I think its about how small a functional unit of 'intelligence' can be made. The smaller it gets, the more variants can result by their unique combinations.

Please contact me anytime. I hope you have my cell number, or please send me an email, I'd be glad to respond. Thanks.