I am borrowing this caption straight off this article on LiveMint "Poor aren’t lifeless bricks".

For a good part of our history, folks seem to have focussed on exclusively on charity as a means to uplift people out of poverty. While in some cases, this benevolence might be essential, in most cases it is counter productive. I still remember one of dad's church sermons based on the proverb "Give a man a fish and you feed him for a day. Teach a man to fish and you feed him for a lifetime.". 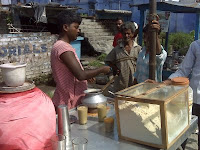 Poverty, in each of its grim shades, is undoubtedly a crippling condition. While it gags and bogs down, it finds itself fighting hard against the basic human instinct for survival, upliftment and reaching a state of equilibrium with his context. A lifeless brick definitely cannot do that. The fact is that inherently anyone who has fallen wants to rise and the risen want to fly. The key is to simply enable them. All that they need is inclusion - social and financial; to an infrastructure that could help them help themselves.
(pic: A Sattu "powdered baked gram, a high energy giving food usually mixed with water or with milk" vendor in Bihar.)

There are many whose knowledge about poverty starts and ends with reading about it on the Wikipedia, or watching 'Slumdog Millionaire'. Communicating with them is disheartening at times because they tend to stereotype the poor as somehow second rate. It is at times difficult to convey Poor NOT EQUAL TO Stupid. While it is a fact that the poor have lesser opportunities; that is simply the side-effect of a 'state' they were/are in and can be enabled to get out of.

Another misconception is equating 'Rural' with 'Poor'. Both are entirely different realms in themselves. There are the urban poor too and their problems are just as daunting! This is more a difference in contexts.

There are a few who have got this understanding right - and they will no doubt be able to reap its benefits. The telecom companies for instance, have done a great job so far! Instead of just pitying the poor, they have gone ahead and launched (potentially profit making) services that addresses the communication inclusion part. This is definitely not charity! By ensuring that their services were tailored (packaged) for the 'poor' (Rs. 50 lifetime connection packs for instance), but not compromising on the service quality itself, they have at least started with the right step. The same networks host the communications of the richest as well as the poorest :). It is high time that all product and service designers are sensitized on these issues.

Also, do check out Universal Financial Access - India. It is a social network initiative which aims at financial inclusion started by Sanjay Bhargava who is also the Chief Mentor at Eko.

Welcome to the age of 'micro' revolutions that have macro implications!
Posted by Anupam at 4:44 PM