Post Da Vinci Code the book and the movie, the Last Supper does not require much of an introduction. Many myths and stories surround this masterpiece. The only problem is - there are so many look-alikes, enhancements and fakes around that perhaps not many have seen the real thing (which of course, is not hanging at my neighborhood museum either ;-) ).

Thats when I bumped into a BBC online news piece saying they'd found musical notes hidden in the pattern of breads as arranged on the table. I don't know if that harmony of patterns (== music) was a deliberate act or a natural coincidence. How I wish Leonardo Da Vinci had a personal blog in his times ;-)

What really impressed me was this related website (the tech part :-)) Here's the link to the site we anyone can now see the original masterpiece in as much detail as a non-critical eye can perceive! and in an amazingly smooth flash interface. 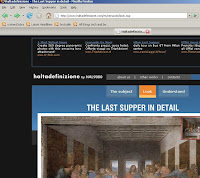 They say, at 16 billion pixels, its the highest definition picture in the world! Here are the specs of the image:
The technology partners for this project include AMD, Nikon, Clause, DiAugustini, iNet and powered by HP. Really impressive stuff. I'd recommend this site - this is research grade material.
Posted by Anupam at 7:48 PM