Blast from the past

(File under: Non-tech) Last year about this time, I went back to my old high school- St. Thomas Residential. While I was walking from the junior section to the senior section, I found this drum set lying in a heap by the corner - junked. 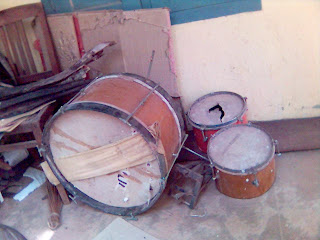 I was shocked and excited at the same time, since I had quite a few memories associated with it and so would a few of my batch-mates from santhome. Perhaps I should have done more, but the only thing that drew upon my mind then was to take a snap. Thank God, I at least did that!

Its been a decade since we left school; we were the batch of '97 Indian School Certificate Examination students. I'd joined the school in '94, as a ninth standarder. Though I am a 'native' of Kerala, till then, I'd never spent more than a few holidays here; so it was a new beginning of sorts. With the new school came a new bunch of friends, some of whom are very much in touch to this day. One thing that bonded a few such friends was music. That bond and the timely encouragement from a few teachers and friends resulted in 'Excalibur' - the first ever school rock band from this part of the globe (and perhaps the only one which batches after us and teachers remembered, at least for a while, with - "oh, you're one of the Excalibur guys!"). The initial team: Jayadev (lead vocals), George (keyboard), Zach (rhythm, lead guitars/ drums), Danny (Lead Guitar), Vivek (guitars) and me (vocals). There were others too, who'd pitched in when some of us had to leave.

Today, while I was flipping through my old pics, I chanced upon this shot again. This junked piece of equipment, which I'm sure my friends would recognize, had once formed the center-piece of our meager ensemble. A day before our first live performance, (thanks for pointing this out) Reghu our designer geek, designed the logo - Excalibur, The mythical sword of king Arthur, on a round sheet of paper which we stuck to the bass drum. If I remember right, it was this very drum that first bore our emblem. We really could not afford to buy a new drum and so were happy and thankful to have at least the old school drum-set! Slightly off-tuned and somehow precariously functional, it served us well and gave us a quite few good times.

I also recall once while Zach (Guitarist, keyboardist and a drummer rolled into one) was at the drums, we were playing "Miss you in a heartbeat" (?) on stage for the school-day. He hit the cymbal at the end of a roll, the cymbal went crashing all the way down to the floor and the stick flying through the air. We went on as if nothing had happened and Zach cool-ly rose from his chair, retrieved the stick, pulled up the cymbals and continued drumming.

Those were the best days of my life :) and this picture brought back some memories. I've jotted 'em down and hope that others with whom I'd shared my space and time, too could re-live a few moments from their past.
Posted by Anupam at 8:30 PM

It felt really good, travelling down memory lane as i read the post. if i remember, Excalibure used to sing some songs from Def Leppard! rt! I even got myself i Def Leppard hits CD after being inspired by the band....regards
Ameetha

Zach here! Dang! That thingy brought back memories man! Hah! Wow! The cymbal falling down was the last thing I was worried about! I thought my foot would tear right through the skin!!
What are the chances of a reunion tour? Van Halen's doing it, freakin Spice Girls are doing it, why on earth shouldn't Excalibur?? Dig the blog man. Hope you guys are kickin ass in yonder land of a billion coconuts! Take care!

Glad to have taken you 'down the memory lane' :).

Hows USofA treating you? I dont see no problems with Excalibur II except dude, you aint in coconut land! Cheers!

Dude, it was me who did the logo...! :P at least the one that was stuck to the drum around school day time! And now that I think about it, it was a pretty cool attempt, all hand-drawn and all :D

A'ji, fantastic snap - brings back those good ol' days! Man, I loved those Excalibur jams :) The '97 school day gig was one that I will always cherish.

And coming to think of it, can we have a reunion tour? It will be fun :)

Was that you? I never knew! I'd always thot it was George.